I moved recently, and that meant I had to update my address. The United States Parcel Service has decided to keep up with the modern times and email you with what letters and packages are coming in the mail. I don’t think I would’ve willingly signed up for this, as I already get 600 junk emails a day. This must’ve been some box that I didn’t uncheck in the overly complicated process that is changing your mailing address from one street to another street. So now I get an email every day showing me scanned images of what is coming in my mailbox. I now get junk emails displaying the physical junk mail I’m about to get. It’s pretty awesome.

I’ve recently made a conscious decision to unsubscribe myself from email lists because I probably spend a total of 15 minutes each day just deleting emails from J Crew, Homage, Jet Blue and Men’s Health. That’s 15 minutes I could use scrolling through Twitter. I was about to unsubscribe myself from my “USPS Informed Delivery Daily Digest” when something caught my eye:

A return address of “Wood” in late July can only mean one thing: Toppa Invite is coming in the mail. I have fully digested my Daily Delivery Information and goddammit, it was delicious!

I had to get ready. No more sitting on the couch watching “Get Up!” every morning. I had to stretch out my blogging fingers. I had to heat up my takes to extra spicy. I also had to look up my WordPress password.

You know how this goes. Let’s kickoff the season, as we always do, by power ranking the pictures in the Toppa Invite. This year’s theme: “The most athletic fantasy football league around.” So let’s power rank each member of the Toppa League by just how athletic they look in their picture.

He does look goddamn professional in this picture. Loogit him. Shirt tucked in. Whistle ready. Holding that one finger really high so everyone on the court knows that there’s only one shot. But being a referee is as unathletic as it gets. The athletes PLAY the game, man. You’re just bringing everybody down by making sure we play by the rules.

Also, not pictured are Woody’s all-black New Balance sneakers. If your shoes look like they come with orthopedic inserts, you’re not looking that athletic.

I can only assume Timmy is playing some kind of hockey/shuffleboard with a kyle*. The result of which, and again, I’m just making assumptions, was that he either launched a soda can right into the windshield of an old beach lady’s car, or whiffed magnificently.

*For those of you who are confused, a “kyle” is what us OGs at the beach called a dustpan and broom. I heard it’s because there was this kid named Kyle, who Ray hated, so he just sent him to clean shit up all day. He used the dustpan and broom so much, that they started calling it a “kyle”. It sounds like the poor kid never got to work in the lots. What’s even the point of working at the beach.

And this is the last time in his life Vegas did anything athletic. 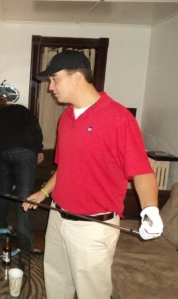 We all know how I feel about golf, so JBiggs is looking pretty unathletic in this picture. He’s not even on a golf course.

But JBiggs gets extra points for recently turning his leg into the letter “Z”. You’re not truly athletic unless you go too hard in an adult, social sports league game and end up in a boot. 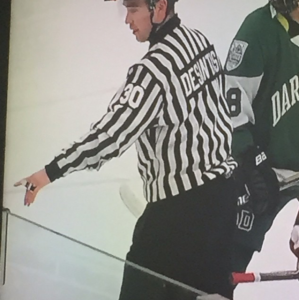 I know I just said referees are unathletic, but have you tried ice skating?!? That shit is tough. Like imagine ice skating around, looking at a bunch of shit happening at full speed, trying to remember a bunch of rules, then trying to stop? That shit sounds next to impossible. 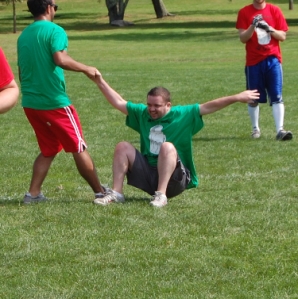 Brendo clearly just attempted a diving catch or something and that is why he was on the ground. Very athletic. Also, bonus points for teamwork.

I’ve seen this photo dozens of times now, and it only gets more intriguing. This picture could be on the wall in Mudville Pub showing the 1938 RI State Champion Rogers High baseball team. I have no idea if Jeff is athletic in this picture. He’s in the front row, so he must be important. When I played for Rogers they put me in the back, all the way to the left.

You may not be able to tell but Micho is in full sprint in this picture. He was in the bathroom and heard Cotton Eyed Joe and said “Oh shit!! That’s Micho’s jam!” He then zipped up and sprinted to the dance floor, signaling for people to clear out while he lights the hardwood on fire.

Also, what is this woman doing?

Stomp it out lady!

(This is the point of the blog where I make fun of someone and Woody texts me later and tells me it’s someone I know.)

I’m not gonna lie, I look pretty athletic in this. I just finished running over a goddamn bridge for chrissakes. I’ve got good form. I’m dressed like a runner would dress. (Too bad now I don’t actually run when I wear all those compression and athletic gear, I just wear it to keep everything in place and feel good about myself.) And look how tired I look. That’s a real athlete’s face right there.

This is clearly the end of a game, and they put all the bench players in to get some burn, and the other team was fouling to try and save some of the clock. Props on the token white kid uniform though: oversized shorts and jersey, with a T-shirt underneath.

We all know Buckets is probably the most athletic guy in the Toppa League. I mean, I’m pretty sure that the dude’s KID could beat me in a race. But there are two details I noticed about this picture: One, there are a whole bunch of little kids in the background. Two, the angle of this picture is taken looking up at Buckets. I think some little kid took this. He was like “Mr. Buckets, how do I dribble a basketball?” and Buckets responded like this:

Speaking of which, did you see Jayson Tatum destroy some middle school kid by ruthlessly crossing him up? There are no winners in these basketball camps. That entire camp is going to savagely make fun of that poor kid because he got his ankled broken, scooped up, put into a FedEx package and sent into space. And the tiny, little detail that it was by a PROFESSIONAL ATHLETE won’t matter to any of the other kids, because kids are assholes. And it’s not like he’ll get to tell his kids this story. In 40 years that boy won’t go to his kids and go, “I once played with Jayson Tatum,” because his kids will look it up on YouTube and clown him for a month. Jayson Tatum should by that kid a fucking car or something.

And the flip side of the coin isn’t much better. Enes Kanter decided to not play defense on the kids at his camp, because he’s 7 feet and humans should be nice to children, and like 4 kids sunk 3-pointers in his face. Then all the little kids ragged on him. Again, kids are assholes.

I can’t tell if PWood was on the wrestling team or the basketball team in this picture, and that’s the point. He coulda been boxing dudes out in one of those wrestling onesies, grabbing boards while having a dude in a headlock. Then he would just straight up pick a guy up and throw him into the basket. Look at that mean mug. It’s straight up frightening. And what is he holding? Is that a severed head?

Football is back fellas! Ye Olde Hall of Fame Game is on TOOO-NIGHT! Sure its featuring the Ravens and Bears who went a combined 14-18 last year, and the starting QBs will be Robert Griffin III and Chase Daniel. But who cares?! You don’t actually have to pay attention to the game, just having it on in the background will get you ready for the season. The sounds of the game will get your mind back into football watching shape. The roar of the crowd, the quarterback barking out the plays, the referees whistles, helmets smashing into each other causing permanent brain damage. Gives me chills just thinking about it.