I appreciate everyone voting for the greatest of all Thanksgiving foodstuffs. Apparently 5 less people voted this week, which is sad. But I’m going to deal with it the only way I know how, by saying those people can fuck themselves. No Thanksgiving for you!

So let’s just jump right into it!

I decided it was not very American to have a democratic vote and then just have whatever I want win. And Thanksgiving is all about America. Even though the Canadians have a Thanksgiving, they just have one because we have one. It’s neighbor envy. I understand. You can only look over the boarder so many times and not get jealous of our awesome holidays. So, go ahead and have your Victoria Day the weekend before Memorial Day. And your little Canada Day three days before our Independence Day. You can even have your own Thanksgiving a month before we have ours.

So even though Ham is VASTLY superior to Prime Rib, I decided to let the public speak and allow the People’s Rib to travel on to the next round. And thank God it got smashed by White Meat Turkey! We never have to speak about that whole mess ever again.

In a matchup that was too close too call until last night, the right Turkey won. This means, next week you will get to decide the answer to the age old question: “White or Dark meat?” And no, you don’t get to have both! You have to choose!! This isn’t real! On Thanksgiving day, you can have whatever you want. You can have everything. But right now, you have to pick!

The more I think about it, cream of [whatever] soup is delicious. It doesn’t matter what you’re creaming. Cream of Mushroom? Delicious. Cream of Broccoli? Yum. Cream of Celery? Bring it on. Cream of Asparagus? Wow, you have a lot of creamed soups. Sure, let me have it. Cream of Shrimp? ….really? Eeeee, I dunno. Can’t I just have more Cream of Mushroom?

The fact remains, Green Bean Casserole takes green beans and slathers them in so much deliciousness that you can’t taste how disgusting green beans are. And in the off-chance you get a little smidgen of green bean in there, we’re gonna dump a bunch of onion rings on top.

I gotta say I was a little shocked by this. Personally, I associate Thanksgiving with Brussel Sprouts and not Corn. But I did say all that shit about Corn being at the first Thanksgiving. And the prime harvesting time for Corn is November. Did you know this? I did not know this. Why am I eating Corn in summer and not in fall? I am so confused! BIG CORN must answer for this.

I have to tell you, I’m very relieved by this. I can’t even fathom what would’ve happened to me if I lost to Timmy’s team comprised of Johnny Manziere and Darren McFadden AND Stuffing lost to some motherfucking Gravy. But thankfully, 73% of you are sane enough to realize Stuffing is the Tom Brady of Thanksgiving.

Mashed Potatoes had the largest victory of the week. This leads us to the ultimate showdown next week: Stuffing vs. Mashed Potatoes. Set your DVR’s, this is the matchup we’ve been waiting for.

Guess what? I’m not going to tell you which is which, because no one knows! You can’t tell me the difference between Pumpkin and Sweet Potato Pie. If you did a blind taste test, when you took a bite of the second one, you’d be like “No, that’s just a second bite of the first one. You were supposed to give me two different pies. This tastes exactly the same.”

I’m not as upset about this as I thought I’d be. I mean, you’re clearly all wrong, but I can get on the Apple Pie bandwagon. A really delicious Apple Pie can be so good it makes you want to punch an old lady.

Next Week: The Elite Ate! 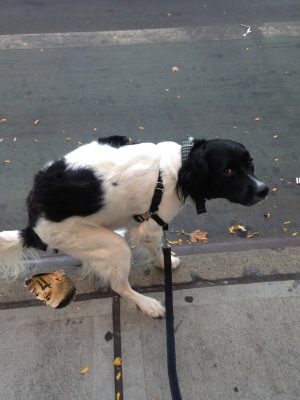 Greg Hardy. There’s a lot to say about how terrible a person this guy is. I think Katie Nolan said it better than a lot of people, and way better than I ever could, so you should take the time to watch here and then here. And if a picture is worth a thousand words, then the pictures of the bruises he left on her are worth about 6.7 million awful, horrible words about this guy. (By the way, this shit is not “alleged.” She did not throw herself into the tub. I’ve played a full rugby game, then gotten shit faced and fallen down a flight of stairs and had less bruises the next day then she did). Charles Barkley had a sizzling hot take about Hardy, saying things like “I don’t want Greg Hardy dating my daughter” and “Domestic violence is 100 percent wrong.” He then followed it up with a giant “BUT,” saying we shouldn’t kick him out of the league and he deserves a chance to get better. And to that I say this, Greg Hardy is a psychopath and does deserve to get help. He is 6′ 4″ 278-lb man wired for violence and beat the hell out of his girlfriend. There is obviously something wrong with him. The things he says in interviews (“Coming out guns blazin’!”) are things a person with no self-awareness would say. The guy shows no remorse for his actions. In fact, his Twitter bio said “Innocent until proven guilty,” …except you were proven guilty motherfucker! So, he does deserve to get help. He should be in counseling. He should probably be on antidepressants. He deserves the right to get better. But he does not DESERVE to play football. He does not DESERVE to be paid $11 million dollars. Kicking him out of the NFL is not like kicking him out on the street. He’s made almost a million dollars for every tackle he’s made this year. The dude can check himself into a program. He deserves no pity from me.

There are no runners up this week. Greg Hardy is such a shitty person, that even shitty performances of guys like Eddie Lacy (-2.00 points, 48 points for the season), Travis Benjamin (2.20, 2.60 and 1.70 points in his last game, even though he’s supposedly the 12th best scoring WR), or Andre Johnson (0 points and has 7 total games of under 5 points, including 3 with zero) seem pretty great in comparison to that human toxic waste dump. Also, everyone lost by at least 20 this week, so no one player would’ve really made any difference.

Thank God JeffWho is still here to keep losing when I lose. Thanks buddy!

JBiggs’ team is not very good. He’s second to last in points scored. His only wins are against Timmy, PWood back when he wasn’t good, and his brother, which he likely pulled out all the stops to win. He’s lost to Buckets, JeffWho, and even lost to me!

And this is his quarterback:

When you finish the game 3 yards short of the record…and lose. pic.twitter.com/eZ5TA0V6G9

Who leads the leagues in interceptions, with 13. But he’s still the same elite, best-quarterback-in-football Peyton Manning though, don’t worry!!

The good news is I have the longest running streak in the league. The bad news is that it’s not wins. I can’t seem to stop losing. I gave my team the week off from practice. Look:

Maybe some R & R will help get them out of this funk.

My team sucks. I looked at the “Who’s Hot” page in Yahoo’s research section, looking for any new way to find new players and, excluding the two I picked up (who will now do nothing for me), I have four players TOTAL on any of the positional lists (at least 100 players).

Nick put up a sorry 112 total points after it looked like he was turning his season around. Nick just missed getting blown this week (less than 2 points). Again, just getting you ready for marriage, big guy.

All of a sudden, Team J-Mo is in 8th place! He’s won 4 of his last 6 and is currently fighting for a playoff spot. The real test is over the next few weeks when he plays 3 teams in the top 4 (Woody, Micho and Brendo).

This week’s Blowout of the Week is sponsored by the Male Penis Enlargement Pumps Male Sex Penis Extender Massager Toys, whose name is literally just a bunch of Google search terms put together. But that’s what one would expect from a quality brand like Wellsextoys*. Unfortunately, it’s unavailable for Prime, so if you need your penis enlarged “2cm in 2 weeks,” like Amazon reviewer johnathan claims (4 stars!), you’re just going to have to pay for shipping.

PWood has now beat Woody, Micho and Brendo. Were we wrong to doubt our current champion? Was he just suckering us in? I’m pretty sure he did this last year, lingering on the fringes of playoff contention and then made his massive 4-week run. Teach me your ways PWood!!

JD lost despite getting 46.10 points from Julio Jones and Dez Bryant. It’s suddenly a bit scary now that those two are back in full Monstermode for JD’s team. The reason JD lost however, is that Eli was very Eli this week, which roughly translates to “the week after throwing for 350 yards and 6 touchdowns, he throws for 218 yards with 2 touchdowns and 2 picks.”

This week’s High Score of the Week is presented by Bar-B-Q Fritos.

Micho righted the ship by beating up on JBiggs. Micho’s now in third place and second in points scored. If he can take care of business against the other DeSantisesisesis’s’ this week, he could make a run at first. But Vegas is matched up against me this week, so Austin’s definitely staying in first.

The run at the top was all too short. Even though he got Blow Out of the Week’d his team had a pretty solid week. His downfall was getting only 11.60 points from his 2 RBs combined. And you can’t expect Gronk to be the best player in the world EVERY week.

Boring! Austin’s back on top. Nobody cares. This blog was way more fun when I could consistently make fun of Austin.

Be sure to set your lineups, the Bills play the Jets (-1.5) in a game no one really cares about, even the fans of these two teams kinda don’t enjoy watching their teams. Thankfully, I don’t have any players in that game, so my guys are gonna continue to take the next few days off and think about what they need to do to turn this thing around.