This is a safe space right?

This blog is our own little trust tree, right? A place where I can get something off my chest and not feel judged? Because I think I have to confess something.

So, I moved in with Boom Boom about 2 months ago now. I packed all of my stuff into storage and moved into her tiny apartment. We’d both lived by ourselves, with no roommates, for several years, so you’d think no longer being able to do whatever we want, whenever we want would lead to some irritation. But it hasn’t. And you’d think the 2 of us living with my 60 pound dog in a 300-square-foot box that is always somewhere between 75-80 degrees would spark a fight or two? Not at all. Honestly, everything is great. Better than great. It’s awesome. For real. I couldn’t be happier.

It’s not that Boom Boom’s TV isn’t nice, it is. It’s fine. Her TV is good and I enjoy watching it. I can still watch everything I used to watch on her TV. It’s just watching her TV every night gets a little… boring. There’s nothing exciting about it. It’s just the same picture on a reasonably sized screen.

My old TV was huge. It was amazing. It was sexy. It was me and that TV, late at night, watching anything I wanted. Every once in awhile it would let me plug my computer into the back so I could watch RedZone or stream something from some crazy site in Australia. It wasn’t just the big screen, my old TV had a fat sound bar too. Oh man, the sounds my TV made when I turned it on! When I was single and had my own place, sometimes I’d even had TWO TVs at the same time! Oh man, and everything you hear about that experience is right. If you like watching one TV, two TVs is twice as awesome.

But now I just have this one TV. This one regular TV. For the rest of my life. It’s fine. Boom Boom’s TV is fine. GOOD! Good. I mean her TV is good. I love Boom Boom and her TV.

Maybe when we move into our new place, I can open a bottle of wine, introduce Boom Boom to my old TV and see what happens.

New recurring segment this week! Since Roger Goodell continually sucks, he deserves to be Dog Shit of the Week every week, but that’s a place reserved for the players who ruin our weekly match-ups. So, I’m introducing the Weekly Roger Goodell Bullshitometer:

This Week: Hungry Hungry Hippos where all the marbles are pellets of Bullshit.

Last week I was pissed because of a bullshit accusation that took Tommy away from me. But this week is a little bit more serious. Goodell did a sit down with Matt Lauer about how they’re making strides with concussions and player safety. Surprise, surprise. Matt Lauer took it easy on him. Lauer is proving himself to be the most creampuff interviewer in the world. He’s like a 9th grader giving a science report. Okay, ask this question. Pretend like your listening. Don’t screw up this next question. You got this. Okay, looks like he’s finishing up. Annnd, ask the next question. Good. You looked good asking that one. Okay here goes the next one. I wish my ex-wife argued like Matt Lauer, maybe I’d still have some more of my shit.

In this interview, Goodell mentioned that comparisons to the Cigarette industry are unfair because they put up posters in the locker rooms. Everyone knows the best way to protect against a concussion is a poster. He said all pediatricians agree that teaching kids the NFL’s bullshit Heads Up tackling technique will reduce concussions in kids. I’m pretty sure they all started that statement with “Well, the best way to prevent brain damage is not to play football, BUT if you are going to play…” He also said that they’ve tightened penalties for teams that ignore concussion protocols. Let’s see how that worked out for them in Week 1 of the season:

Glad your plan to improve player safety seems to be working. Oh wait, that’s a clip of multiple players launching themselves at Cam Newton, hitting him helmet-to-helmet multiple times, and showing him writhing on the ground, or even worse, just lying there, holding his head. But don’t worry, they copped to missing “at least one” illegal hit.

Now here’s the worst part, and this is Goodell to a T. He’s increased the punishment for dangerous play. So, if the Denver Broncos go head hunting for Cam, they get fined and/or suspended. If the team doesn’t pull him out of the game when it looks like he could’ve had a concussion, they get fined. Goodell now has NO accountability. It’s all everyone else’s fault and not his.

How much would it cost to have someone in the booth or on the sideline whose job is to say, “that hit looked bad, can we stop to check that guy out?” Isn’t that what these independent doctors and spotters are supposed to be for? And this person should also have the power to review plays and then say, “You know what, that looked like he did that on purpose, penalize that dude” even after the fact. They already do it in college!

Also how does a 15-yard personal foul penalty offset a 5-yard intentional grounding call? I understand when both teams are holding, the penalties should cancel each other out. But a 5-yard “you didn’t throw it far enough” and a 15-yard “guy literally didn’t remember the end of the game” hit are not equal. Personal fouls should trump all other fouls. Also, fuck it. You want to make sure guys stop doing the shit they’re doing. Make a personal foul worth 30-yards. If you can throw the ball 70-yards and if the two guys running full speed looking forwards and backwards at the same time bump into each other, and then get the ball at the two yard line, then we can penalize a team 30-yards for deliberately trying to scramble a guy’s brain.

Dez Bryant. Dez was projected to score 12.76 points. He had 1 reception for 8 yards. Great game plan Dallas. Rookie QB, first NFL game. Why not avoid one of the 5 best receivers in the league who can catch any deep ball/jump ball you throw his way? Great game plan. You wonder why a receiver isn’t coached to run straight out of bounds when there’s 10 seconds on the clock and they have no timeouts.

Vegas is the worst kind of New England fan. I bet you listen to EEI religiously. What the fuck is there to complain about?! Stop it!! Leave the state once in awhile. Waaaaaaaa!!! I’m not happy because we didn’t win 15 Super Bowls. Put yourself in any other team’s fans’ shoes. I’m not even talking about the Browns, or the Vikings, or the Bills. I’m talking about EVERY team. The Patriots have been consistently one of the four best teams in the league since before you could drink legally. 15 years of dominance and you’re still fucking complaining. Gronk had a sore hamstring and suddenly he’s a bitch:

And don’t think I forgot about the time you doubted the great one: 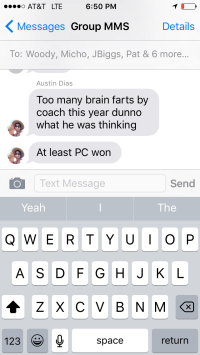 Sure we shoulda won a few games we lost last year, but we were still 1 play from making the Super Bowl. Best coach in history and this kid fucking complains. I bet you want to trade Brady and play Jimmy G from now on. You have no idea how spoiled you are. You probably thought Drew Bledsoe was bad. My first Patriots memory was watching the Pats get waxed by 48 against the 49ers. That year, by the way, our first round pick was an offensive lineman who was asian. ASIAN! Do you know how terrible that is?

Buckets lucked out that Vegas went fucking crazy and called Gronk a bitch. Dude barely broke a hundred. Not a strong start.

Not a great week from the kid who told me he was gonna grab first place this week. Timmy had some nice performances, like Matt Ryan (40.70 points), Jordan Matthews (24.40 points) and the Seattle D (21 points). The problem was he had waaaay more crappy performances than nice ones. Four players failed to even score 2 points. Two others only had only 4 points.

PWood made me sweat this week. Unfortunately for him, Keenan Allen shredded his knee. That’s two number one receivers with torn ACLs in two years for PWood. How bout you don’t draft any Patriots next year buddy.

Annnnnd that’s why you draft Antonio Brown first overall. 126 yards, 2 TDs, and one personal foul for twerking. Just like the Gordie Howe hat trick (1 goal, 1 assist, 1 fight), can we think of a name for 100 yards, 1 TD and 1 Excessive Celebration? T.O. comes to mind. Antonio Brown had a full T.O. on Monday Night? Does it work? We’ll have to workshop this more.

#Nick won by 45 points, but he’s not higher in the PowerRanks because everyone would’ve beaten Buckets this week.

55 points from Andrew Luck was all it took for Brendo to beat up on Timmy. It was a good thing Luck scored so many points because no one else on Brendo’s team, besides his kicker and defense, scored double digit points. Brendo should be fine though. The Colts are going to suck this year and Luck is going to have a ton of garbage time points.

Is this the highest Jeff Who’s ever been in the Power Ranks? It’s almost like Jeff’s taking the league seriously this year. No longer willing to sell off his team for parts. Getting a “B” on his draft grade. He still doesn’t have a fucking avatar for his team though. Jeff, go to the library, use the free internet and change your team avatar.

Heading into Monday night, Woody was down 0.50 points with Navarro Bowman still to play for Micho. That’s brutal. It’s like, you know you’re gonna lose, but since you’re winning, you think there’s a chance. You want be rational, but you can’t help getting your hopes up. There are worse ways to lose, but it still sucks.

OOOOOHHH DREEEEEW BREEEEEEES!! 54.65 points!!! The Saints are going to be even worse than the Colts, which means Brees is going to have even more junk time points. Just in case you forgot, the Suck My Warburton championship was built around Drew Brees. Watch out!!

Well, Josh won the DeSantis Bowl, but it didn’t even matter. Typical older brother, hogging all the attention. Mom & Dad don’t care that DeAngelo Williams and Spencer Ware combined for 71 points alone. They just care about the baby. I’d say you get to keep your bedroom, but that shit’s getting turned into a nursery now. As a younger brother who also has an older brother who just had a baby, lemme tell you JBiggs, you’re fucked. Somehow you’d think you can get away with everything, because you’re parents will be too busy caring about your new nephew. But no. JD will be able to do no wrong, and they’ll expect even more outta you.

Congrats buddy. You handed off the rock, your wife carried the ball for 9 months and then your baby ran through the hole for a touchdown. Go team! I look forward to many years of integrating NICK into your team name.

Alright, set your lineups and make your picks! Fuck the Jets (-1) are in Buffalo taking on the Bills Mafia in amazing ColorRush Green and Red. Christmas in September! I wonder what it would look like on my old TV…