Ugh, as if things couldn’t get any worse. Another fucking Pats loss, and to the Broncos, of all teams. Remember last year, when Brady came back from his suspension and was the MVP favorite after Week 8, even though he hadn’t played 4 games. It made sense too. He was 1st in completion percentage at 73%, and the next closest QB was Drew Brees at 69%. He was 1st in Passer Rating at 133.9, and the next closest was Matt Ryan at 115.8. He was also first in Yards per Attempt, second in Yards per game, and had thrown 12 touchdowns and ZERO interceptions. If you prorated those stats across a 16-game season, he would’ve put up 5,276 yards and 48 TDs, which was as good, if not better than the 4,806 yards and 50 touchdowns of his 2007 MVP season. But how things change in just a year. Let’s just jump into this week’s Power Rankings.

I had a really good time in Newport this weekend. Shout out to Timmy letting me park free at the beach. It’s pretty crazy to think that the beach is still open in November, but when the weather is still 90 degrees everyday, it makes sense to keep the parking lots going. I kinda hope the weather breaks sometime soon, it’d be weird for it to be this hot on Thanksgiving.

While I was in town, I got to meet PWood’s new adorable kid. It’s a shame they both have to go back to work so soon. I understand that no companies really give paid leave anymore and not replacing the repealed universal healthcare with anything at all means that you’ve got bills to pay, but still.

Well it’s a great time to be a mechanical engineer. Maini’s hard at work overseeing the building of that border wall. His motivation is high to win Toppa League again this year, since he’s yet to be paid for 7 months of work.

It’s JeffWho’s turn to set Austin’s lineup since he got deported to Mexico in August. Woody and I warned Vegas not to go to the beach so often. He got way too tan, and look what happened. His team has doing pretty well, and everyone has stayed honest taking their turn setting his lineup. Don’t mess up what we all promised to do, JeffWho.

It’s nice to see Brendo get a solid win after spending the whole week in the hospital eating that burrito with unregulated meat. But hey, at least you lost a whole bunch of weight.

I heard that Buckets got a promotion! It makes me feel so old that I’m the same age as the Vice Principal of my old high school. That new title I’m sure comes with a nice pay bump. Of course, with the overinflation of the dollar thanks to the President just printing more money to try and fix the current financial crisis, that raise is practically worthless. But I’m sure it’s nice to feel appreciated.*

Let’s hope Woody can work that Buckets-VP connection. With the closing of Special Education programs around the country, I’m worried our commissioner, might be commissioning full-time. He could always work at the beach, the offseason looks like it’s going to be a lot shorter.

Man, I can’t believe JBiggs has been able to stay on top of his team after getting drafted and shipped out. I had no idea they had internet on base in Syria. It was pretty bad luck to have the draft reinstated after 44 years and then getting sent to war. But at least he’s having good luck this year with his team.

Micho’s really been hitting the waiver wire hard. It must be all that free time since he got laid off when all that public work funding got cut.

Life in Canada is almost starting to feel normal. Man, it was really convenient that Boom Boom works for a Canadian bank, so she was able to get a job pretty easily. It took me a really long time to find a job. It meant I got to write a lot more posts, so I guess it’s not all bad. And the flight home from Toronto was wicked quick, and pretty cheap. I also went to more Red Sox games this year than the last couple combined. SkyDome sucks though.

*I made this up and it was the original joke that was the impetus for this post. Then it turned out that this was actually one of this motherfucker’s boneheaded ideas!!! It turns out that, in fact, you can’t make this shit up.

Dogshit of the Week 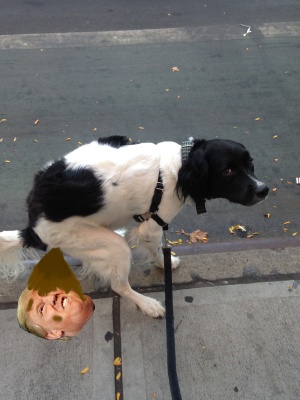 This Guy. This fucking guy. He looks like my vomit on Sunday after I spent all night drinking beers and eating candy corn.

I’m getting so fucking tired of this guy. And you know why? It’s not the racism, or the sexism, or the religious intolerance, or the possible ties to Russia, or the corruption, or the bullying. It’s that he’s DUMB. I don’t want a president who claims he’s smart because he has the “best words”. You know, like: “bigly,” and “very much better,” and “very much smarter,” or sometimes he can string all those words together to make a masterful sentence, like: “No matter how good I do on something, they’ll never write good. I mean, they don’t write good. They have people over there, … they don’t write good. They don’t know how to write good.” What a wordsmith. He’s like Picasso. If Picasso wasn’t actually an impressionist painter, but was actually trying to paint pictures that looked like real life but did this instead. And when he’s not using broken english, he speaks in pure generalities, saying “Things are bad,” and “Those people don’t know what they’re doing,” and “We’re gonna make things so much better.” This motherfucker talks like a 11-year old giving a book report he didn’t read.

Can you please explain the steps you’d take to fix things in Syria?

Christ, I feel like I’m drunk. I didn’t even make that up. He said that shit during the debate. What the fuck!? I’m just kidding, I made that up. But I bet you believed me!

He always says he’s gonna make things better, but never once explained how. How, motherfucker? Give me ONE plan. Just one fucking idea you have. For anything! Except the wall. We all know about that one. I can’t wait for that wall to protect me from the national debt, terrorism, climate change, medical insurance and my retirement.

Oh and he’s suuuuuch a great businessman, and he’s gonna just run the country like a business. Except every business he’s every run has failed. How the fuck do you fail at running a casino?!!?!?!?!? How do you lose all your money when the one rule of casinos is “The house always wins” and YOU’RE THE FUCKING HOUSE?!? How do you fail when every single game’s odds are in your favor?? And he bankrupted 3 of them!!! That means he went 0 for 3 on businesses that mob bosses and inexperienced Native Americans are able to make billions from. Oh but he’s reeeeaaaalll savy.

Being President is hard. You wake up everyday, literally, at your job. Think about it. Your house is your office. We all have 40-hour work weeks. The President works every second of his life, for 4 years. Every President has gone into office looking young and handsome and has come out looking 20 years older. Obama has more gray hair than my dad, and my dad is 15 years older than him. It’s the hardest job in the world. Why do you think the Secret Service guys would gladly take a bullet for the President? Because they’re happy they’re not the President! You have to know everything about everything. And it turns out, “everything” is pretty fucking complicated. You have to make wicked tough decisions. You know how sometimes you sit in front of the TV and scroll through Netflix for like 15 minutes and can’t decide what to watch, and then just go “Fuck it,” and watch Archer. Well, in this case, Netflix is the fate of the free world. And there is no Archer.

Look, voting for Hillary is like going to the gym. You may not want to do it, you may not like it, but it’s in your best interest. Or, let me put it another way: Imagine, for just one second, it won’t last that long, I promise. But imagine you’re not a fan of Tom Brady. Imagine you’re a lowly Jets fan. (Awful, I know!) To you, Tom Brady is fake. He’s annoying. He’s been around forever. He may or may not have cheated. He maybe even wrote some texts and emails that he shouldn’t have. You have varying levels of respect and/or non-respect for him. But would you, Jets fan, want Brady quarterbacking your team? Yes. You would. Would you want fucking Uncle Rico to quarterback your team???

Set your lineups and make your picks. Atlanta (-4) takes on Tampa Bay tonight. I wish the Color Rush uniforms were the Bucs in Creamsicle orange and the Falcons in black, but sadly, we get another week of Red vs. White. It’s apple picking weekend, the Patriots are on bye.

I’ll #sticktosports next week but until then, Vote on Tuesday. Now if you excuse me, for the next 5 days I’m going to drink brown liquor and look at pictures of dogs in Halloween costumes.