Note: The following post also occurs on my new blog rhyswarburton.com (this domain name is lame, I know, but I couldn’t think of anything witty at the time). I’ll still be doing Power Ranks every Sunday during football season, but sometimes I find myself wanting to write stuff that isn’t JUST ranking stuff in a power-based order. I also find myself wanting to have a single place where I can archive my best posts.

Last Friday, after getting home from work, I grabbed my dog to take him to the dog park. Before I walked out the door however, I grabbed myself a beer. This is not the first time I’ve grabbed a road soda for the dog park, as it’s quite an enjoyable experience to sit on a bench, outside and watch your dog run around and sniff other dogs’ butts. As I took a sip of my Greenport Harbour Black Duck Porter and began to relax, I thought to myself, “I think ‘Dog Park Beer’ may be one of my top 5 favorite beers.” Which then got me thinking, what would my top 5 favorite beers be? What better way to solve a question like that then with some Power Rankings.

Bar Beer. Too inconsistent. Sometimes you get a fantastic Bar Beer, where you go to a really great craft beer bar and the bar tender lets you try 3 or 4 different tastings, just so you can get the right one. And it’s quiet and your sitting with your buddies and you can really enjoy yourself. Or there’s those times when you can go to the 3 Sheets Saloon and get $10 pitchers of beer and drink 4 pitchers between you and your 3 friends while playing cornhole in an empty bar. Those are good Bar Beers. But for every good Bar Beer, there’s a bad Bar Beer. You know bad Bar Beer. Maybe you’ve bought one for $9 an “Irish Pub” that for reason plays Lady Marmalade once an hour. Maybe you’ve been surrounded by 5 Murphys, listening to a really bad cover band, opting to buy a PBR for $7, because at least that way you get 16 oz instead of 12. Bar Beer is too many things to be considered in the running for these Power Ranks. So, on to…

It’s like drinking a beer outside, but have the option to run inside and grab a bite to eat or take a shit. Screens aren’t necessary but improve your experience exponentially. As do coolers. So does a radio. I feel like I’d rather a radio over a TV. It makes me feel like I’m in the 50s drinking a Schlitz just like my Paw!

The best of the sporting event beers because you’re outdoors and it’s warm, unless, of course, it’s Fenway in April. The worst part of Baseball Game Beer is price. You can literally get a six-pack for the price of a beer at a baseball game. But once you get your hands on one, there’s nothing better than sitting in that uncomfortable plastic bleacher chair, surrounded by a thousand other people and the hot air on your face. I’m actually serious. It’s pretty great.

I’ll let my spirit animal Kyle Kinane explain how great drinking a beer in the shower is:

The shower is amazing. When I first wake up in the morning and trudge around my apartment, I feel like I want to die. Once that warm water of the shower hits me in the head, everything feels like it might be okay. I’m not saying drink first thing in the morning, but if you have to take a later afternoon, early evening shower, why not make a good experience great.

It’s quite relaxing, sitting outside with a good beer watching all the dogs run around and be happy. Plus, I pack the beer in a thermos, so no one knows that I’m drinking beer tee hee. 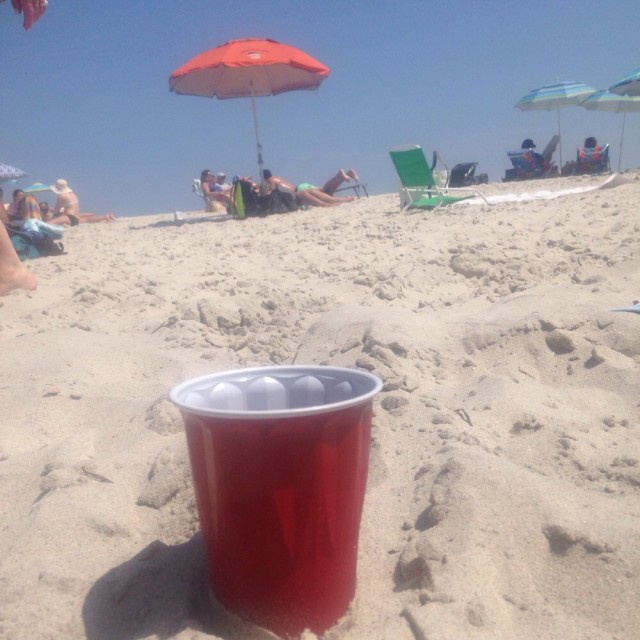 You know Beach Beer is pretty goddamn amazing when it’s the type of beer that makes me go, “You know what’d be pretty great right now? A cold Coors Light.” Beach Beer is so cold and refreshing. Life doesn’t get much better than when you’re sitting in a beach chair, with a cooler, under an umbrella (I’m very fair skinned!), listening to the radio, sipping an ice cold beer*. You wish you were there right now, don’t you?

And God’s Porta Potty is right there in front of you, FOR MILES. “Excuse me fellas, I’ve just ripped 8 Coors Lights, I’m gonna go test the water temperature.”

*The beach is worst if you happen to forget ANY of those items at all. There are so many things that are crucial to enjoying yourself at the beach for more than 15 minutes. No beach chair? Have fun burning and breaking your back propping yourself up on your elbows lying on your beach towel. No sunglasses? I’M BLIND! It’s the one place where if you didn’t bring all 45 things on your checklist, you’re fucked.

Morning Beer doesn’t just mean, any beer drank before noon. 11:59 am doesn’t cut it. Morning Beer should be drank with your first cup of coffee. Morning Beer should get the reaction of “Well, if it wasn’t Martin Luther King Day, I’d say you have a drinking problem.” Your mom shouldn’t be okay with Morning Beer. And that’s what makes it so great! You’re doing something that on all other occasions (and probably ALL occasions, actually) is wrong and not good for you. But we have an excuse! It’s St. Patrick’s Day, and a bunch of 10-year-old girls are doing Irish step dancing down the street and I MUST be drunk to watch it. Or it’s 8 o’clock and Stoke is playing Norwich City, having a few pints is only right! Or there’s a marathon today, so to celebrate never being able to do this incredible physical feat, let’s do a power hour at 9 am.

Morning Beer also has the built in potential for an early night. There’s really nothing better than drinking a beer with the sole purpose of getting shit faced, and knowing you could still get a good 8+ hours of sleep. It’s fantastic.