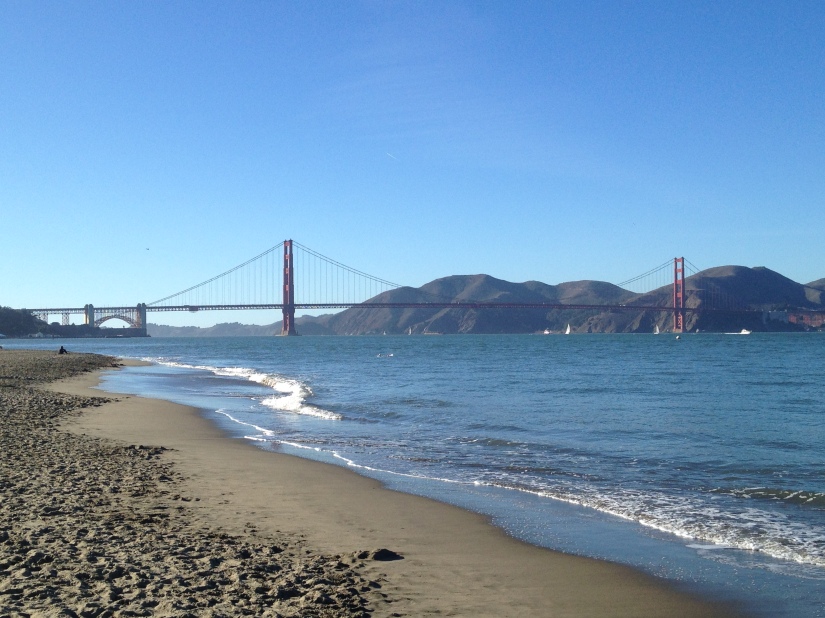 I’m flying out to San Francisco tonight to visit my buddy Murph and go to the 49ers-Pats game. I was busy packing last night so I didn’t have tons of time to write a blog post, so this post will probably be even more half-assed than usual.

I kind of love flying. People hate it for some reason, but I’m into it. I mean security sucks, but that’s more because it drives me insane how inefficient it is. Oh, and the motherfuckers who don’t know how to go through security. They drive me crazy too. Yes, ma’am, you do have to take your shoes off. How do you not know this? Everyone knows this. There’s a sign that tells you this. C’MON!!!

Maybe people don’t like waiting around. But I think it’s kinda awesome. You have all this time to kill, and killing time is super fun! Oh no, I guess I’ll HAVE to go to this airport bar and drink gigantic beers*. Uh oh, more time to kill. I guess I’ll just have to watch SportsCenter and eat a burger. I never do that because I hate it. Then when you’re on the plane, you get to just sit there and watch TV! It’s great. And they bring you food. Who cares if it’s any good? It comes in those little individual sections. It’s like I’m back in elementary school.

*Airport beers are like $16, which sucks, but their also like 28oz, so I guess that makes up for it.

It’s only when you NEED to do something does flying suck. It’s an overnight flight, and I NEED to sleep in this upright torture device. I’ve got 20 minutes to catch my flight and I NEED to get through this line that’s 45 minutes long. I just ate a burger and drank two 28oz beers, I NEED to use this public bathroom. That’s when it suck. Otherwise, relax, your on vacation.

Here’s a my checklist for my vacation:

This Week’s Level: I just at a huge burrito filled with Bullshit and now the rice is expanding in my stomach

So this week the Houston Texans take on the Oakland Raiders on Monday Night Football, in Mexico City! Did you know that?! I did not know that was a thing. Well it is. And here’s a few stories about this week’s upcoming game:

So the players should not drink the water or drink anything with ice in it. Good thing they’re playing a game that requires them to expend a ton of energy and constantly sweat. Seriously, are all the Gatorade buckets and water bottles filled with bottled water? Also, it’s probably a really good idea to not leave your hotel room. But don’t order room service! Do. Not. Order. Room. Service. I assume this is because of the food, but I wouldn’t rule out murder. Like, Amari Cooper could order room service and when the guy comes to the door: Surprise! Bad Hombre! Two shots to the chest. Now you have an empty roster spot to fill.

This gonna go over well with the players. They already hate flying to England, and that place is safe! Think about how much they’re gonna hate going to Mexico City, and then can’t leave their hotel rooms except to go to practice.

Then there’s the fact that the fans are planning to boo the national anthem. They already boo the anthem when the US Men’s National Team plays Mexico in soccer, and that was before we elected Mexico’s #1 fan to be El Presidente. That is gonna be some loud booing. I can’t wait for ESPN to edit that out. Oh and speaking of ESPN, they’re here to tell you that everything is JUST FINE. Those other two stories? They are those fake news stories from Facebook that you’ve been hearing about in the news. The NFL has never been more popular in Mexico and everything is FINE!

You can pretty much consider these two your Dog Shits of the Week. Timmy and Vegas are officially out of the playoff hunt. Now it’s just playing for pride. As my old track coach said “Go for time!” That’s what they say to you to make you not feel like a loser. “Keep trying! You definitely don’t suck! Don’t worry that you still have two more laps to go and everyone else has finished and are already eating granola bars! Push yourself!” Man, they should’ve motivated me with granola bars. I bet I would’ve won that way.

Anyway, neither Timmy nor Vegas broke 110 points this weekend and both lost. They’re ranked 11th and 10th, respectively, in total points scored. And both are averaging 30 points less per game than the league average. The reason that Vegas edged out Timmy this week, is because of this fire:

Brendo is last in the league in scoring but is somehow still in this thing. He’s putting up only 120 points per game, but has somehow managed 4 wins. He’s gonna need a lot of help to get into the playoffs though. He basically needs everyone else in the league to lose every week. 11 losses every week.

PWood took a big loss this week. He won 3 of his last 4 up until last weekend and was rising in the standings. Currently, he sits in 9th place, on the outside looking in. A big upset against #Nick this week would increase those playoff odds by a lot.

Buckets handed PWood a loss this week and was able to jump him in the standings. In order to stay in the playoff hunt, Buckets has to win, but also needs losses by Brendo, JD, and #Nick.

JBiggs has been in a little bit of a free fall lately. But there’s nothing like heading to Vegas to pick up an easy “W” and get things back on track. It’s kind of like heading to Cleveland in the NFL. Or Buffalo. The warning signs are still there, however. Over the last 6 weeks, JBiggs has only averaged 126 points per game, which is 30 points below the league average. This week, he put up the 4th lowest point total of the weekend, and actually decreased his playoff odds a bit since last week. That said, JBiggs can clinch a playoff spot if:

Point Two Zero. That was the difference in points between JD’s happiness and #Nick wanting to drown his sorrows in sambuca and chinese food. Both these teams are in control of their destinies and wins this week would get them that much closer to the playoffs. But they’ll also need losses from Brendo and Buckets to help their cause.

Has the team name change magic worn off? After winning 3 weeks in a row by an average of 50 points per game, JeffWho lost this week and failed to clinch a playoff spot when the chips were down. He can still clinch one this week if:

Those are a lot of scenarios, but they all start with JeffWho taking care of business against Micho. Wait, JeffWho plays Micho this week?! Why haven’t I heard about this yet? Where’s the sexual tension via the group text?! I need it!

I talked a lot about Woody being unlucky this year, but this season was way rougher for him than most of us. No other team but Woody’s has had 1500 points scored against them this season. He’s projected to have 1900 scored against him for the season! He’s first in points by a good 7 points per game. It’s pretty crazy to think about where Woody would be if he played a different schedule this year. All that said, Woody’s sitting pretty. He can clinch a playoff spot if:

But if Woody loses, he has to marry Mary off to Jameson, and Buckets gets his house. I don’t make these rules, just report on them.

Micho seems to have righted the ship. After losing 3 of 4, he’s won his last two including this week’s shellacking of Timmy by more than 90 points. Micho can clinch a playoff spot if:

I finally got my little star next to my name. It’s just like in elementary school. That little star means nothing. But it means EVERYTHING. While Woody has been the unluckiest team in the league, having the most points scored against him, you could say that my team is the “luckiest” having the least points scored against me (1271). To that I would say “Offense wins games. Defense wins championships.” I read that on a T-shirt once. I’m not sure what it means since you can’t get to a championship without winning games. So does defense also win games? I’m very confused by it. But I’m also 2nd in points scored, so my team is legitimately good. So shut the fuck up.

Lotta big matchups this weekend. We get Micho and JeffWho; two crazy kids trying to give love a chance in this crazy world. We also get the Toilet Bowl with Timmy and Vegas; no matter who wins, we all lose. PWood and #Nick square off in a matchup with playoff implications for a lot of teams. But possibly the biggest matchup of the weekend is between JBiggs and Brendo. If JBiggs can take care of business (he’s a 9-point favorite), he, Micho and possibly JeffWho (if he beats Micho) will all get clinch playoff berths.

Set your lineups and make your picks. New Orleans (+3.5) takes on Carlolina tonight. I’ll be on a plane, which is probably for the best, because even though this matchup looks good on paper, these Thursday night games are terrible. Also watch out for any of your players on the Raiders and Texans. There’s a good chance they’ll be a late scratch, missing the game with the screaming shits.