I’m so fucking sick of Projected Points. What’s even the point?! (ha!)

These things have no basis in reality. They’re calculated by some algorithm that has as much of a chance of being right as your kid putting magnetic numbers up on your refrigerator. And you know who makes these algorithms?

That’s right. Fucking NERDS! Why are we all listening to these stats compiled by nerds that don’t mean anything at all. And why do I believe it? Every time? If I read something that projected the final score of every game this weekend, I wouldn’t believe any of them. But when Yahoo tells me that DeAndre Hopkins is gonna score 13.05 points this weekend, even though he hasn’t scored double digit points since Week 1, I’m like, “Nice! Sounds good. Pencil me in for 13.05 points!”

Shall we look at a few examples? Nerds love data. So here we go: 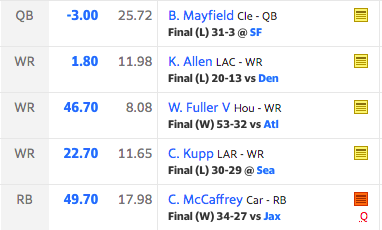 These are from Brendo’s team this week. Some of these scores are very impressive, but some of them are not. But, all of the projections for these players are WILDLY inaccurate. What other profession can you make predictions like this that everyone relies on, can be the polar opposite of correct, and not really pay any repercussions for it? Well, that sounds a lot like being a weatherman. But I don’t bet on the weather. I don’t have to pay $100 if I thought it was gonna be sunny and it ends up raining.

Some of these projections are so grossly incorrect that it’s shocking that they even have them. Like, for example, when they project how you’re going to finish the season 2 minutes after you draft your team. The ToppaDraft projections had #Maini coming in second in points. Cut to real life, he’s the lowest scoring team in the league. On the other hand, Brendo and Buckets were supposed to come in last and second-to-last, respectively with a combined record of 5 – 21, with the two lowest scores in the league. Instead, they already have more combined wins than they were projected to have, and are second and third in points scored.

My strongest guess for why they do display that shit, is for people like BoomBoom, who are playing and don’t really know who everyone is or who they should play. But for BoomBoom, who has never played fantasy football before in her life, it took all of one week for her to say “I don’t like the projections. They confused me. They’re never right.” I bet they also need to justify paying all the nerds they have on staff crunching their numbers, so they can call they’re moms and say “Mom, come downstairs, my algorithm made it onto the homepage.”

Some of them are getting absurd. ESPN uses IBM’s Watson. You know, the computer that beat everyone at Jeopardy! I’m glad Disney paid who-knows-how-much dollars to IBM to contract their supercomputer to guestimate fantasy football scores. What a great use of the world’s smartest computer! No wonder SkyNet bombs us all. It was probably like “I could’ve cured cancer, but you had me running simulations on how many yards Ezekiel Elliot will have against the Cardinals.” So when you open the ESPN app, and somehow figure out how to navigate your way to a player, Watson shows you it’s computer titties:

I should just ignore them. I shouldn’t look at the projections. But I fucking do. Like an idiot. I sit there on the shitter, comparing the receiver who’s projected to score 8.14 points against the guy who’s projected to score 8.03 points. And I can’t help but do it. I know those numbers don’t mean anything. But they’re there! And I need those 0.11 points. That’s what’s going to put me over the top this week. Sorry Mr. 8.03, you’re on the bench this week. But if you over perform on the bench, I’ll kick myself all day Sunday, then play you next week, and you’ll then underperform. So at least I’ve got that to look forward to. 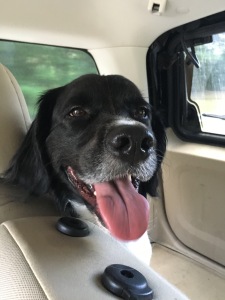 The Dog Shit of the Week this week was going to be “Projected Points” but then it turned into the whole blog. So, let’s keep part of the blog happy. Loogit that good boy! So happy! Suchagoodboy!

Well, judging by the constant rain and perpetual wind, it looks (and sounds!) like fall is here. Let’s go ahead and rank some of the most Basic Bitch Fall Shit with this week’s PowerRankings.

Baking cookies using your Kitchen Aid and posting them on Instagram. Good job, Tiffany. You did a wonderful job dumping the package of Nestle Toll House cookie mix into that $650 mixer. You’re basically Ina Garten (who is the cook/chef of choice that Basic Bitches strive to be).

#Nick has lost 3 in a row and is still the lowest scoring team in the league.

Buying as many Pumpkin Flavored things that you can find at Trader Joes. I wouldn’t know anything about this one.

Drinking Pumpkin Spice Latte. I actually had one of these for the first time recently. I need to tell you, it’s fucking delicious. It’s whole milk with cinnamon and sugar in it. It’s a goddamn milkshake! Of course Madison drinks 3 of them a day.

Commish has now lost 3 of his last 4, including the last 2 in a row.

Instagram holding “the perfect apple” from your trip Apple Picking. Apple picking isn’t as basic as the other picking activities since the result is delicious apples and cider and possibly cider donuts.

JBiggs is in an alternating Loss, Win, Loss, Win pattern that left him with a loss last week. He’s hoping that the pattern continues and he picks up another win this week.

All kinds of knitted shit. Mittens, hats, scarves. And it’s not even that cold out. It’s like 52 degrees.

JD’s only wins have come against #Nick and Woody. Not terribly impressive.

Friendsgiving. But you don’t really cook that much food (or what you do cook is bad). Really, Amber and her friends just polish off 2 cases of wine.

Timmy, like JBiggs, is in an alternating pattern, but his is the exact opposite: Win, Lose, Win, Lose. Timmy hopes that the pattern doesn’t repeat itself against Buckets.

Picking out matching Halloween costumes for you and your 8 friends. And not like a theme thing either. It’s 9 identical costumes.

Micho has now won three in a row.

Pumpkin Spice Latte with the Pumpkin Spice Muffin. Those things are like 500 calories. That’s like a 1200 calorie breakfast, but Mackenzie don’t care because it’s fall, bitch!

Brendo has also won three in a row now. One of his or Micho’s streaks will come to an end this week though because their matched up against one another. It’ll be a home game for both of them if they watch it at O’Brien’s.

Instagram post amongst some beautiful fall colored trees while your best friend stands just out of frame and lightly tosses leaves around you so they look like they’re naturally fluttering around you. Why do these girls do this to each other?

Instagram in a Pumpkin Patch. This is so much more effort than apple picking. Like, they sell pumpkins at the grocery store. And they’re just as good as the pumpkin patch pumpkins. Apple orchard apples are like 15 times better than grocery store apples, so it makes sense to go to the source. But driving to a fucking pumpkin patch? That is some effort for the gram, right there.

Buckets is the second highest scoring team in the league.

JeffWho is the highest scoring team in the league, with almost 800 points over 5 weeks. He’s won two in a row and scored 377 points in those last two weeks.