Me and the old lady took a trip to IKEA this past weekend. Going to IKEA is a scary proposition because it’s a labyrinth designed to keep you inside and give you Stokholm syndrome (pun intended) into wanting all the shit they sell. Oooh look this lamp is only $3.50! I feel like we could use a lamp shaped like a frog. There’s even a goddamn restaurant in the middle of it. They’re probably just trying to calm down hangry wives murdering their husbands who are crippled with indecision. I’ve been on trips to IKEA where three hours in, I lost the will to live, and wanted to just leave. Do you know how hard it is to just put it all back in IKEA? It’s a maze within a maze. Thankfully, Boom Boom and I got in and out of there in an hour and a half, got what we needed, got some extra stuff (but not too much!), all the pieces were included and there were no fights. Flawless Victory.

Everyone hates putting together IKEA furniture, but I love it. I mean, sure, Joseph Allen, inventor of the Allen wrench can get fucked. Hey, what if I combine two perfectly good tools, a screwdriver and a wrench, except make it half the size, give it no leverage, and have it fall of the screw every two and a half turns? Sounds like an amazing tool. The Swedes will eat that shit up.

I should really thank my parents for letting me play with and continuing to buy Legos. Thanks to Lego, I totally know how to read a set of instructions with no words or any real direction, just subtle change between images and an arrow or two. Seriously, buy your kids legos.

After we had our IKEA dresser all put together, I was reminded about the first time I realized I was a real adult. I knew I became an adult when the things I got as presents, or things I bought myself stopped being things I played with and became things I used. I think the exact moment was when I bought myself a really nice garbage can for my apartment. It was stainless steel and had two compartments, one for trash, one for recycling, and the lid closed all slow and fancylike. No more slamming the lid shut. This trashcan was unslammable. I spent like $150 on a trash can! And fucking loved it! But when you make a purchase like a garbage can or a dresser from IKEA, the childlike excitement of “I can’t wait to play with this thing for hours!!!!!” is gone. I got one of those awesome Nest fire alarms. It sent Boom Boom a text when I burnt the chicken. A text mid-smoke! That’s amazing. That’s some SkyNet shit right there. But there’s no playtime after you plug in a fire alarm. That’s how you know you’re an adult. Now you buy a thing, set it up, and go on with your life, happy it’s 0.3% better.

Julio Jones. Mr. 99! So the week I had one of the best receivers in the game going against the sieve that is the Patriots defense, they actually decide to play well. At least he scored a touchdown this week, which was his first of the season by the way. 1 yard!! I just needed one more yard to reach the receiving bonus. Those 6 points would’ve made it so I would’ve… lost by 26 instead of 33. Right. Moving on. 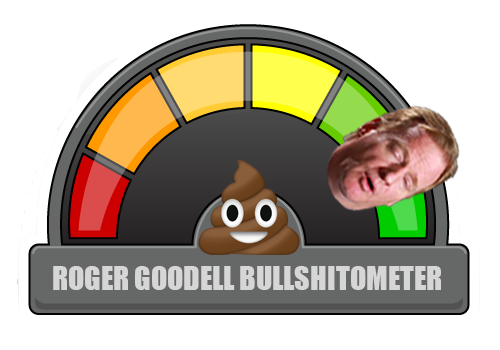 This week’s level: Did they teach bullshit in elementary school?

It was a pretty quiet week for the Ginger Hammer. There wasn’t really any new bad news to report. I did some Googling to see what Roger was up to this week and nothing exciting came up. However, if you search “Roger Goodell quotes” the number one hit is: “I spent a lot of time in the school psychologist’s office. I didn’t apply myself. My mother thought I had learning disabilities.” OOOOoooooohhhhhhhh. Now this all making sense. We hired the special kid in class to run the goddamn NFL! Well done! The guy who you don’t trust to cut your meat at the deli is making decisions about people’s future mental health. Good stuff.

Well, it’s Halloween this weekend and that means it’s time to bring back one of my favorite gimmicks. Let’s review this year’s sexiest costumes and power rank them accordingly. 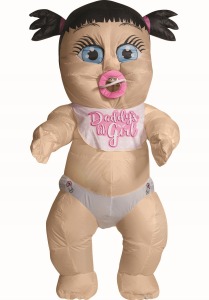 Adult Baby Inflatable Costume. This is what nightmares are made of.

With this week’s stinker, JeffWho has now scored 2 of the 3 lowest scores in the league (don’t worry Woody, you’re still number one). JeffWho is averaging 105 points per week, which is almost 25 points below the league average.

Women’s Jellyfish Costume. AAAAAANNNNNNNNNDDDD that looks like a dick.

I started off this post with Micho in last, but then started writing JeffWho’s section and realized how much his team sucks, so I switched them. Then I looked at Micho’s team for a second time, and thought, “Man, but Micho’s team is really, really shitty too.” So, congrats! You both get to be in last. You both suck. A lot. You literally both suck so much, that I could pick who sucked more. 6 losses in a row vs. lowest point total. Who cares? You both stink.

At least you guys are happily in love.

Adult Fabric Sexy Doll Mask. Holy shit! This is wrong. This is coming from a guy who thinks blowup dolls are funny. But in the ironic way, you know? Like, “why would anyone have sex with a blow up doll?” It doesn’t even feel that good. I mean, I BET it doesn’t even feel that good. Blow up dolls are silly and stupid. Let’s bring it out to breakfast with us when we’re hungover and order it pancakes. That’s funny and dumb. This costume is… rapey.

PWood’s team is basically this year’s 49ers. He’s in every game, but then ends up losing. He’s averaging 126 points per matchup, which is barely below the league average of 130. He’s not bad, he’s just unlucky. Like really, really, super, very unlucky.

Also this week in RhysNice’s Parenting Tips: (sorry I forgot last week) So you have to dress your kid up for Halloween. Here are some ideas: 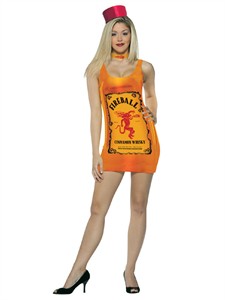 Fireball Tank Dress. Just like shots of Fireball, this costume seems like a good idea at the time. Yeah baby, you give me heartburn like no one else and you make my shits smell weird the next day. This is also top contender for worst (or best!) walk of shame costume.

Women’s Upside Down Honey Costume. You know, nothing gets me going like dressing up like a 12-year-old girl. The sexiest thing about this costume is the waffles.

Have the wheels fallen off for Brendo? After winning 4 in a row and scoring more than 160 points in back-to-back weeks, Brendo has now lost his last two and scored less than 102 points in both matchups. He didn’t have a single player besides his quarterback score in double digits this week.

Adult Miss Freddy Frueger. It’s a valiant effort, but there is no way to make Freddie Krueger sexy. If something scared me from like 3rd grade through, like, way older than care to admit, I’m not gonna all of a sudden be like “Hey lady. You look purdy.” I’m more likely to be like, what the fuck is wrong with this girl’s brain to think that is in any way sexy. Also, am I supposed to be excited by a potential hand job with a knife-glove? Cuz call me crazy, but I’m not.

Eric Decker scored zero points for JBiggs this week. Every other one of his players scored over 6 points. Le’Veon Bell, Drew Brees and Amari Cooper all hit the bonus as Bell ran for 134 yards, Brees threw for 331 with a passing and rushing TD, and Cooper had over 200 yards(!!) receiving. Those three players combined for 103.65 points. Which, by the way, was enough to beat Micho’s crappy 83 points. 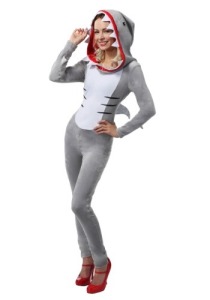 Women’s Sassy Shark. Does a shark need to be sassy? It’s a fucking shark. Like, if you go up to a shark and were like, “Hey, Mr. Shark,” It would bite your fucking arm off. Pretty sure that’s plenty sassy.

After not being able to put up 100 points in Week 5, Timmy’s averaged 139 points and won in back-to-back weeks. He heads to Cinci this week to take on PWood. If he beats PWood this week, which (sorry) everybody seems to do, than he’ll go to 5-3 and be in the top half of the standings.

Desirable Me Character Costume. This may be the winner of this year’s “trying way too hard to be sexy, and not even remotely trying to be the thing you are saying you are” award. You can’t just say you’re a Minion by wearing goggles and half of a yellow shirt.

The difference was basically Russell Wilson, as he scored 42.70 points and helped JD beat Woody by 50 points. JD had been riding the win-loss roller coaster this season, following every win with a loss, but every loss with a win.

Adult Sexy Stormtrooper Costume. I’m just going to keep putting this one on the list every year until Boom Boom gets the hint.

I got stomped this week. I put up the third most points of the week and still lost by 30. Yahoo gave me a weekly grade of “A” and I still didn’t even come close to winning. I had a 3% chance of winning going INTO the early Sunday games. It also gets better, because in this week’s edition of “What the fuck?!! How is anyone supposed to be any good at Fantasy?” I have SEVEN players on bye this week. That’s almost half my team. I’m starting guys I don’t even know the name of. 4-4 here we come.

Since renaming his team, Buckets’s team is 3-0. Sometimes you just need to get rid of the locker room cancer. And that cancer was Satin & Lace Eddie. It’d make sense naming your team after a guy who can’t seem to stop being fat even though he’s paid lots and lots of money to not be, would give you some bad karma for the year.

Adult Debbie Bodysuit. Now we’re talking. Go ahead and feel free to throw me around the bed first. I’ll just lie here and you can moonsault off the dresser.

5th Element Leeloo Thermal Bandages Costume. Yup. This’ll do. 14-year-old Rhys was all about 5th Element Milla Jovovich. Especially since we didn’t have the internet back then. You can use my Multipass.

He stumbled a bit there, but Vegas is back in the top spot, after putting up almost 200 points. Vegas put up 80 points on Thursday alone. Our matchup was over before it even began. Vegas is now averaging 156 points per week, which is a good 25 points higher than the league average.

Goddammit! This makes me angry how good of an idea this is. Some people are just too good at Halloween.

Weekend Matchup to look out for:

#2 Spoiler Alert flies to Atlanta to take on the first place #Brady40MainiHorny. HewittSportsbook.lv has Vegas as a 13 point favorite right now. But, will #MainiMagic continue for the 6th week in a row?

Be sure to set your lineups. Arizona, Green Bay, Jacksonville, Los Angeles Rams, New York Giants, and Tennessee are all on bye. Miami (+3) is at Baltimore tonight. Wake up early on Sunday, we’ve got more bad football in England. Minnesota (-9.5) takes on Cleveland and God save the Queen.