Well, we’ve reached the end of the Fantasy Football SZN and that means it’s time to give out the Dog Shits of the Year.

Runner Up: Drew Brees – He wasn’t awwwwwful, but as the second QB off the draftboard at the top of the 3rd round, JBiggs was thinking he’d get better production than the 10th QB in fantasy.

Jay Ajayi was the 10th overall pick. He scored only 1 TD all year.

If you take out the two games where Murray put up 28 and 25 points, he averaged only 6.45 points per game. He only had two other TDs this season outside of those two games and he only had 5 total. He had twice that amount last year, and was the fourth ranked RB in fantasy.

Runner Up: Mike Gillislee – Remember when Gillislee scored 3 TDs in Week 1 and looked like LeGarrette Blount 2.0? Neither does Bill Billicheck. The 22.50 points Gillislee put up in Week 1 accounted for almost half of his season’s points. After a decent-ish Week 2, getting 69 (nice) yards and a TD, he put up 3, 4, 5, 1, 3, and 3 points. He never carried the ball again.

Last year, Amari Cooper went for over 1100 yards and 5 TDs. This year, Amari Cooper basically forgot how to catch the ball. He failed to break 100 fantasy points on the year, and if you take away the freak 200-yard game, he scored 3 points a game.

Runner Up: Dez Bryant – Remember when Dez was super good? Wasn’t Frankendez a thing? He’s not even the best receiver on his own team anymore.

TE: All of them (Except Gronk and Travis Kelce).

Tight ends in fantasy are more random and more infuriating than kickers. JeffWho, please once again explain to me why you want to have our flex position also include tight end. Because I’d rather not play one at all. And you want to play TWO!?

The number 7 tight end in fantasy didn’t even score 100 points all year. Evan Engram was the number 4 tight end in all of fantasy. Wanna know some of his league leading stats? Week 1 through Week 5: 4.40, 10.90, 4,50, 6.20, and 0.00. That’s some DEVASTATION right there. His highest point total of the seasons was 15.90 points. LEAGUE WIDE DOMINANCE. I’d rather play another IDP next year than play a fucking tight end. 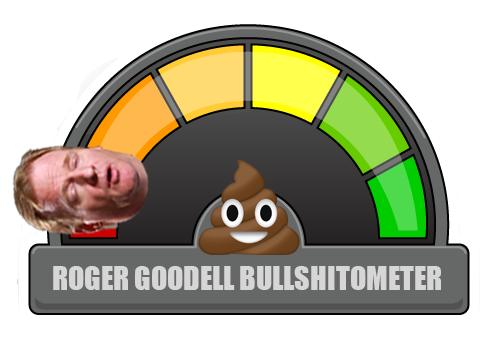 This Week’s Level: Look at all this bullshit all over the floor! Yeah, but I cleaned up this little tiny corner over here.

Quick little update I read about Russell Wilson when you click on his little note on Yahoo!:

The Seahawks have been fined $100,000 for failing to follow the concussion protocol with Russell Wilson in Week 10.
Advice: “There was a failure in the application,” the NFL and NFLPA concluded after a joint review. In addition to the fine, both the coaching and medical staffs will be required to attend “remedial training regarding the protocol.” It hasn’t been usual for the Seahawks to push boundaries during the Pete Carroll era. Their handling of the Wilson situation was so flagrant that the league had to act.

So apparently they took my advice and have started to fine teams for not following the concussion protocol. And they send you to school!! Oooooo, that’ll show em! So they totally did this for the Tom Savage concussion too, who is out for the season, right? Right?

Oh wasn’t this exciting? We got two enormous blowouts which resulted in a rematch from last year’s Toppa Bowl. Neat.

Well A.A.Ron came back and while he wasn’t his old, dominant self, he put up quality numbers for Timmy (30.80 points). Unfortunately for Timmy, none of his wide receivers or running backs showed this week. Those six players combined for just 21.50 points, including zero points from Marquise Lee.

Buckets’ team, on the other hand, performed on all sides of the ball. He had 7 players score in double digits, including Matt Stafford, scoring 24.75 points, and getting 21.00 points from the Jacksonville defense. He also didn’t have a single player score under 7 points.

This one was over before it started. Look at this: 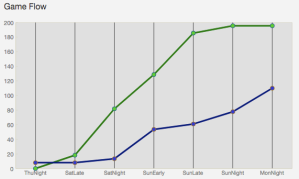 By the time the early games started on Sunday, JD was already up 82 to 13. JD got 63.50 points from Melvin Gordon and Kareem Hunt on Saturday night, which you would think would be enough to seal the deal, but #Nick actually got 52 points from his running backs, Devonta Freeman and LeSean McCoy. But JD also got 50.30 combined points from his wide receivers, whereas #Nick got 9. JD’s 195.20 point is the highest point total for a Conference Championship game in Toppa League history and the 5th highest point total in the playoffs ever.

Well it’s the matchup everybody’s been waiting for. And by everybody, I mean nobody.

Previous Matchup: Oh. Well, this is a little exciting. In Week 6, Buckets beat JD by just 1.8 points (111.10 to 109.30). Of course, in a game where both teams barely manage to combine for 200 points, there’s not much scoring to highlight. It really was a pretty close matchup. Both teams’ QBs scored similar points (Matt Stafford: 22.00 points, Phillip Rivers: 19.00 points). Both got roughly 30 points from their special teams (Kicker, Defense plus two IDPs). In the end, JD got a bad day from his wide receivers and Buckets had one receiver, Davante Adams with 11.40 points, who didn’t.

Of course, this isn’t the only previous matchup of note. Last year, JD and Buckets met in Toppa Bowl VI. JD came in as the 7-seed beating Micho and Woody along the way. Buckets was a magical 8-seed, defeating my 11-2 team #1-seed, and then beating JBiggs in the East Lot Conference Championship Game. Coming into the Toppa Bowl, the game was a PICK, as a #7-seed playing a #8-seed seemed like an evenly matched game where anything could happen. But the matchup itself was not that exciting. JD blew out Buckets 172.20 to 95.60. It was the biggest blowout in Toppa Bowl history. JD finally buried his demons after previously making it to 3 Toppa Bowls and losing each one.

Key Players: Let’s see how each team matches up at each position.

Quarterback: Russell Wilson vs. Matt Stafford. Russell Wilson is the best player in fantasy, but he had his worst week since Week 1, with only 13 points. Of course, he was playing the Rams defense last week, and has the Cowboys mediocre defense this week. Buckets is really missing the Carson Wentz right now. The Wentz Wagon is still the 3rd best player in all of fantasy and he didn’t even play last week. Instead, Buckets has to rely on Matt Stafford, who has been, um, reliable? He’s been the 9th best QB all year, and the Lions are somehow fighting for a playoff spot, so they may try to win big against a Cincinnati team who has quit on their coach, who has, in turn, quit on his team. Edge: Tiger’s Wood

Wide Receivers: Well, considering both teams are currently starting a Jacksonville receiver that I’ve never heard of, it’s not a stretch to say that neither team has a real strong receiving corps. In fact, you could say that they’re more like receiving corpses!! Get it?!?! I chalk JuJu’s 19.40-point performance last week to a fluke play and *cough* bad defense *cough*. I also can’t believe JD isn’t starting Marquise Goodwin whose now thriving since having the most handsome man in football throwing him the ball. The best receiver in this matchup is Michael Thomas, for Buckets, who has double digit fantasy points and a touchdown in each of his last three games. Slight Edge: Finding Foerster

Outta Nowhere Dominant Running Back: Kareem Hunt vs. Kenyon Drake. Drake has 75.90 points in his last three games. Kareem Hunt has 72.70. Recency bias had me thinking this was going to be close but Hunt was going to take it, but lately Drake has been the better player. And they’re matched up against each other this weekend as Miami takes on the Chiefs at Arrowhead. That game could determine the Toppa Bowl winner. Edge: Push

Other Running Back: Melvin Gordon vs. Jay Ajayi. We covered Ajayi above. But in case you didn’t read it, which, ouch, but he’s sucked this year. Especially since he got traded to the Eagles. Melvin Gordon, has very much not sucked this year. He’s the 6th ranked RB in fantasy this year, averaging 15.5 points per game. He also gets to play the Jets this week. Edge: Tiger’s Wood

Tight End: Ugggghhhh. Again with this position?! Evan Engram vs. Greg Olsen. So Engram is the number 4 TE in fantasy, as I mentioned earlier. He’s gotten double digit fantasy points in 2 of the last 3 weeks. Greg Olsen has been hurt most of the year, but he’s finally getting healthy. Olsen had 116 yards and a TD last week in his first week back at full strength. I don’t know, if either of these guys catches a touchdown, it’s a good game. Edge: Push

Flex: I’d rather not compare Latavius Murray and Duke Johnson Jr. They are literally the 140th and 141st ranked players in fantasy. Moving on. Edge: Push

Kicker: Nope. Not doing this one either.

Defense: Buckets has the Jacksonville Jaguars who are the number 1 scoring defense in fantasy. They have 305 points this season, which is actually the 16th best player in fantasy. They’ve only scored under 20 points six times this year. However, JD’s LA Chargers defense is surprisingly good as well. They’re the 5th ranked defense in fantasy and get to catch passes from Bryce Petty all day on Sunday.

As for IDPs, JD has the name recognition with Bobby Wagner and Sean Lee, but both are on the injury report this week. Buckets has gone the route of playing consistent linebackers on shitty teams, playing Reuben Foster from San Francisco and Joe Schobert of Cleveland. Neither player has a really dominant game all season, but both are averaging 8 to 9 points per game in the last 4 weeks. Slight Edge: Finding Foerster

Well it looks like the edge here is going to JD as the favorite. Could we have our first ever back-to-back champion?

JD and Buckets set your lineups. Ignore your wives and kids on Christmas Eve and pray to the altar of Chris Hansen. It’s Toppa Bowl VII. Finding Foerster vs. Tiger’s Wood. Buckets vs. JD. Can Buckets continue to ride the momentum of his crucial mid-year name change? Will he be spitting bars of a victory rap on draft night? Or will JD defend his title? Who will get their face Photoshopped onto the NCAA Women’s National Championship team?

And let me be the first to wish you and yours a Merry Christmas and a Happy New Year.