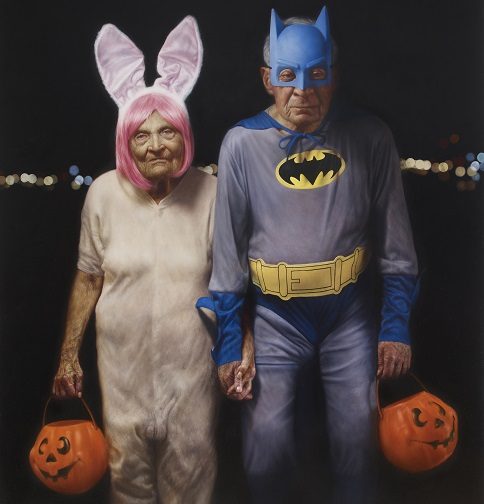 It turns out they do get trick-or-treaters, but there’s a small problem. Amongst the little pirates, princesses and robots that come to their door, they get visits from the worst thing you can think of: TEENS. That’s right. THE TEENS are out here just walking house to house, with no costumes on, backpacks turned around and NOT ON THEIR BACKS, expecting free candy. What do you think life just gives you a free handout, kid? What are you a millennial? In my day, when we were too old to be trick-or-treating, we at least still wore a mask or had some face paint on our something. Minimal effort is still effort, kids.

Something about this didn’t sit right with us. These TEENS were basically stealing candy from a baby. That fun size Butterfinger was supposed to go to a little girl dressed as I dunno, is Frozen still a thing? I don’t even know the characters’ names in that movie. Bella? Fuck it. You get the point. The point is, if you’re old enough to buy a fun size Butterfinger for yourself, you’re too old to go trick-or-treating.
Luckily, we came up with a plan. So if you, too, are ravaged by THE TEENS on Halloween night, or maybe there’s just some kids that you hate in your neighborhood, you can use this strategy. I give you: the Shitty Candy bowl. The key is to answer the door without a candy bowl in your hands. The Shitty Candy bowl sits right next to the Regular Candy bowl (or Good Candy bowl, don’t be cheap) just out of sight of your prospective trick-or-treaters. That way if A TEEN or worse, MULTIPLE TEENS come to your door, you reach for the Shitty Candy bowl, and tell them to help yourself.

Trick-or-treat, 15 year old boy with no costume! Hang on… there you go. Enjoy your Raisinets!

And you 13 year old boy. Oh, you’re dressed as yourself? That’s original. I’ve never heard anyone use that one before. Have some Runts.

Hey there, very small child dressed as an adorable monkey, here, have some Snickers.

Oh you, kid who says “Trick” like it’s fucking funny? Have some black licorice. I hope it gets stuck in your braces.

And if you’re looking for some ideas of what to put in your Shitty Candy bowl, allow me to fill it with Hot Takes:

Can it be all of them? Jesus Christ! This feels very “old man yells at cloud,” BUT there are waaaaayyyy too many commercials during football games. Last Thursday, Jen was heading to bed, so I flipped over to the Minnesota-R-words game. I was semi interested since I had Dalvin Cook going and picked Minnesota in survivor. Jen was also going against Kirk Cousins in the league that I’m really bad in. [BTW, best possible result. Cook went for 23 points (2 yards short of the bonus Rrrrrrr), Cousins had only 9 points and the Vikings won]

So I was mildly interested, but this was an actual thing that happened: The R-words were driving at the end of the 1st half. They ran the ball on 3rd down but didn’t get it. It went to the two minute warning, so the game went to commercial. We came back and the R-words kicked the field goal. They went to commercial again. We came back and they kicked off for a touchback. ANOTHER fucking commercial. Granted it was one of those sneaky in-game commercials*, but I still had to watch Baker Mayfield get his wife a lemonade for the 1348th time this season. Talk about a commercial I’m sick of!!!! I’m glad we gave 15 State Farm commercials per game to Mark Sanchez 2.0.

By the end of the sequence, it was like 5 minutes of commercials in 6 minutes! I don’t even know if the game clock moved. Never mind the fact that Minnesota took a timeout during their drive, and then we went to halftime. There was no actual football during this football game. I ended up watching The Office and going to bed.

Did you know the average football game has 70 commercials? That’s 35 minutes of JUST COMMERCIALS. It’s only gonna get worse too. Soon the 4 o’clock games will start at halftime of the 1 o’clock games.

*I’ve noticed that they have started doing this in between some at bats during the World Series. We’re like 3 years away from them having quick commercials in between every at bat.

This is a text from Woody. But don’t worry, I paid him for it and everything. I don’t steal my content like Barstool or Fuck Jerry.

Right now, the 7th through 10th place teams are 2 games under .500 and 4 games from 6th place. This means there is definitely going to be one, but probably two, very terrible teams in those 7th and 8th seed playoff spots.

Oh yeah, and today’s Halloween. You know what that means. Let’s #PowerRank some sexy costumes. 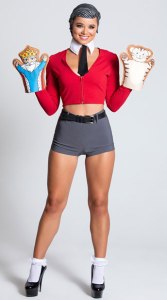 #Nick hasn’t won since Week 2. He’s the lowest scoring team in the league, scoring more than 140 points just once, and that was in a matchup he lost. I think his players are starting to practice their golf swings. 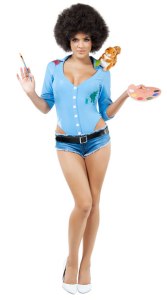 Yeah, I’m not cool with this one either. Bob Ross was too cool of a dude for this basic bitch, sexy Halloween, shitbaggery. Goddammit if Sexy Levar Burton is a thing next year, I’m gonna be pissed. And not at all because of the black face aspect to it.

What’s happened to JeffWho’s team? It’s gone a little bit the way of his team’s namesake, Danny Dimes. After a week where he went off for 40 points, and the collective media was like “Danny Dimes is for real!!!” he didn’t throw for more than 225 yards and had more picks than TDs. He’s now on the waiver wire. JeffWho had a week where he put up 215 points. He then lost 3 in a row, and couldn’t break 100 points the last two weeks. Danny Dimes seems to have bounced back this week, but can JeffWho?

I mean, I have to admire a girl who actively seeks out dressing like a happy pile of shit for an entire night. I think this takes first place for the worst costume to do the Walk of Shame in. 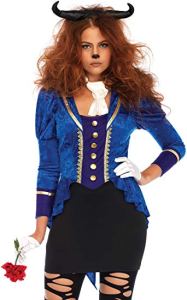 Woody is only 2 points better than the lowest scoring team in the league. Last week he snapped a 3 game losing streak, but this week, he got right back to losing by getting blown out by 67 points. Woody and I play this week. If I win, we’ll both be 3-6. Which would probably be the best result, because then we could just watch the rest of the football season together and not give a shit about fantasy. 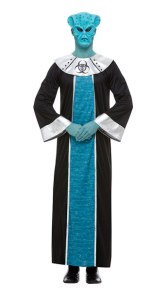 I just… I just don’t know. I don’t even know if this is supposed to be a men’s costume or a women’s.

Nothing like coming off the week you snap a 5 game losing streak and putting up over 160 points the next week… and still lose by 40. I have the highest points against total in the league, which means I’m the unluckiest team in the league right now. FUN!!!

Ah yes, my favorite character: Movie Character. You know. From that famous movie… Movie. And this is the “Sexy” version of the character from that movie. This does not look comfortable. Nothing gets the blood pumping like a good old, massive front wedgie. Also, what the fuck is going on with that blue thing on her face.

Timmy’s now lost three in a row. Timmy was unlucky this week though. According to Yahoo, he put up an A+ worthy week. Unfortunately for Timmy, so did Micho. Timmy went into Sunday night winning by 25 points and Micho only had one player left. But that one player was Aaron Jones, who had up 159 receiving yards and 2 TDs. Of course, Micho waved the white flag earlier in the day, so his win doesn’t count.

Yes, there’s nothing sexier than an evil lady who wants to steal my dog, skin it and wear it as a coat. FOH.

I can’t figure A. Dias’ team out. He’s won three times by Blowout of the Week. He’s also put up the two (historically) lowest scores of the season. He hasn’t won more than two weeks in a row, but has never lost back-to-back weeks. He’s beaten good teams (Brendo and JBiggs) but has lost to bad teams (JeffWho). I can’t even begin to speculate what’s going to happen this weekend. He’s matched up against Micho in the Chourico Bowl. This one’s for all the fava beans. 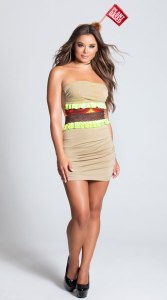 Mmmmm slather me in plant-based burger meat and eat it off my body. What? Too much? By the way, this small polyester dress and stick you wear on your head costs $50 dollars. You’re better off just buying 10 impossible burgers.

I think I just got sloppy drunk and fell down a flight of stairs with my tits out just by looking at this picture of this costume. Mmmm my throw up tastes like mango.

After starting the season red-hot (much like this lady dressed as a White Claw), winning 4 in a row, PWood is now .500 over the last 4 weeks. He’s still in third place, but the cracks are beginning to show. PWood is in the middle of the pack in terms of scoring but has the least points scored against him this season, making him the luckiest team in the league.

Go ahead and sack my home town. I’m just a farm boy. Drink me under the table, then throw me over your shoulder, bring me to your ship and ravage me.

JBiggs is the highest scoring team in the league. He’s won his last three in a row, averaging 183 points over that time. He’s also won his last two matchups by a combined 211 points. However, he’s had some bad luck, because with all that, he’s still only in 4th place. He could move up the standings quickly though with match-ups against Brendo and PWood over then next two weeks. Repeat?

I see you’re a fan of a rushed and unsatisfactory ending. Well I’m your man. I dun’t wunnit! Holy shit, Game of Thrones ended THIS YEAR. I still can’t believe that we all got so excited for something, watched it collectively for 6 weeks, realized it was just okay, then promptly moved on and never gave it another thought. Like everyone.

I gave Micho only 7 words two weeks ago. Then he complained about it, so I gave him 4 (feel my wrath!). But I can’t hold back any more. Micho has been fire emoji lately. He’s won SIX in a row. He’s beaten the 3rd, 4th and 5th place teams and this week he outlasted Timmy in a slugfest (that’s under protest). If Micho wins the Chourico Bowl, he’ll have beaten every top-6 teams besides Buckets, who he plays in three weeks. 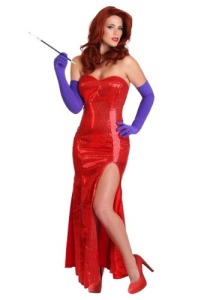 You got me. You dressed as the sexy cartoon from my childhood that I thought was hot before I knew what “hot” even meant. Do whatever you want to me. Even if it’s weird.

Buckets has been on a 4 game tear, averaging 157 points over those 4 weeks. He’s now in 1st place and is the second highest scoring team in the league. It’s going to be hard to knock him out of first place as well. 4 of his final 5 are against JeffWho, Woody, #Nick and JD. After going to the Toppa Bowl twice and losing, Buckets took last season off, but he could be on his way back.

It’s Halloween night and we’ve got the Niners (-10) at the Cardinals. Did you know the 49ers are 7-0? I’m still skeptical. This team is basically Alabama right now. Good defense. AIN’T PLAYED NOBODY!! San Francisco has beaten Tampa Bay, Cincinnati, Pittsburgh, Cleveland, L.A., Washington, and Carolina. Those teams are a combine 17-35. Only one of those teams is a real team, and they had their soul stolen by Bill Belichick in February. But it’s not like a I trust the Cardinals either.

Happy Halloween. Watch out for THE TEENS.